The founder member of the family, IS1380, was identified in the early 1990s as responsible for the loss of ethanol-oxidizing ability in Acetobacter pasteurianus and is present in a high number of copies[1]. In the same year, a second member of the family, IS942, was identified upstream of a beta-lactamase, ccrA, gene in Bacteroides fragilis TAL3636[2] where it was proposed to activate gene expression. 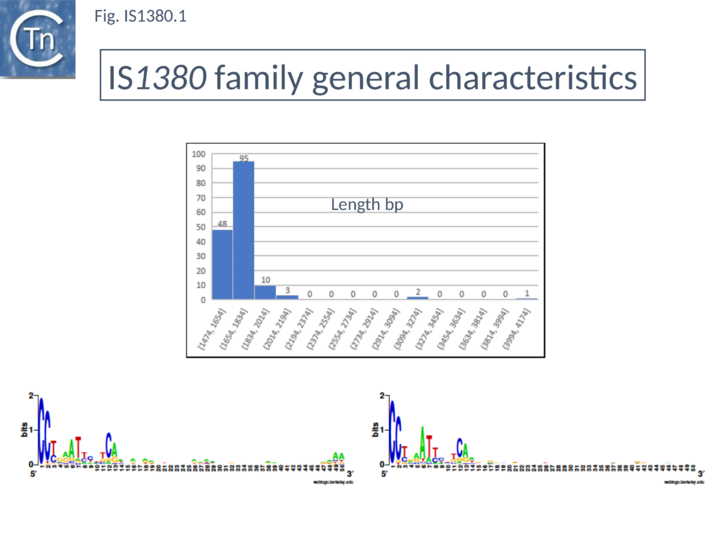 Fig. IS1380.1. The general characteristics of IS1380 family. Upper panel. The average length. Bottom panel. The common ends identified by Weblogo.

Insertion appears to generate a target duplication of 4 bp, although several generate 5 bp DRs. Each member exhibits between 30% and 50% amino acid identity in the potential Tpase. Although the majority of their Tpases often include the canonical DDE(6)K/R, several members exhibit other residues in place of the K/R. These include DDE(6)Q or DDE(6)I. A subgroup, IS942, composed of 13 members all restricted to Bacteroidetes, include DDE(6)N. None of these differences appear to affect the predicted secondary structure. In addition, to the host-restricted IS942 group, two other branches of the Tpase tree are restricted to the Actinobacteria. A single, poorly characterized NCBI database entry (WP_018034290 and NF033539) probably corresponds to an archaeal IS1380 member and, intriguingly, an orf (XP_002337507 and XP_002337507.1) with a 100% match to ISLsp5 (Leptospirillum sp) has been identified in the genomic sequence of the black cottonwood tree, Populus trichocarpa. Tpases of this family include an insertion domain with a predominantly ↑-strand secondary structure[5].

For ISBj1 a simple phase change around co-ordinate 1365 results in the extension of the potential Tpase orf from 328 to 454 amino acids (similar to that of the other group members) and significantly increases the quality of the alignment. In addition, ISBj1 also carries a 112 bp duplication in its right end.

IS1380 itself [1] is present in high copy number in the Acetobacter pasteurianus NCI1380 genome and in several strains of acetic acid bacteria. The family contains at least two tIS present in a single copy: ISMsm12 (Mycobacterium smegmatis ; tetR + Methyltransferase) and ISRop1 (Rhodococcus opacus ; reverse transcriptase).

This IS family is distantly related to the eukaryotic PiggyBac TE family (see [6]) which also includes an insertion domain largely in the form of β-strand[7].

Activation of Neighboring Genes and Transposition

One member of this family, ISEcp1, has proved clinically important in the spread of extended spectrum resistance to beta-lactams. It was originally identified in plasmid plasmid pST01 from an E. coli isolate from the UK (P.D. Stapleton, AJ242809) upstream of a cephalosporinase gene, blaCMY and several lines of evidence suggested that it was often associated with bla genes. It was subsequently identified upstream of a gene encoding an extended spectrum CTX-M type beta-lactamase, blaCTX-M-1, and its relationship to the bla gene was analysed in some detail: although there appeared to be no endogenous blaCTX-M-1 promoter, it was suggested that a promoter in ISEcp1 was capable of driving blaCTX-M-1[8] as had been proposed for IS942 previously[2]. Further study showed this to be true, and primer extension indicated that a promoter was located within ISEcp1 towards its right end of the IS[9]. Other CTX-ML-beta-lactamases (including CTXM-1, -M-2, and -M-9)[8][10][11][12][13][14][15] driven by upstream insertions of ISEcp1 have been identified in various clinical isolates of E. coli and P. mirabilis isolated in Paris [15] and in Enterobacteriaceae from China[13] and Poland[10].

Although there appears to be only a single copy of ISEcp1 associated with the blaCTX-M genes rather than two flanking copies constituting a compound transposon, several lines of evidence show that this single copy is involved in blaCTX-M mobilization.

In a first series of studies[6] detailed analysis of the DNA region surrounding the blaCTX-M gene a natural plasmid, pILT-3 from K. pneumoniae ILT-3 (Fig.IS1380.2) identified a single ISEcp1 copy upstream containing a potential promoter together with a sequence with some resemblance to an IRR (called IRR1) at some distance downstream which might act as a surrogate IR. Moreover, the structure was flanked by a 5 bp direct repeat as expected for members of the IS1380 family, suggesting that it could be a transposable unit. The transposition capacity of blaCTX-M was assessed[16] by cloning the region from pILT-3 into a high copy number plasmid in E. coli and using a mating out assay[17] with the conjugative plasmid pOX38[18] as a target. Surprisingly a number of different products were isolated, each carrying at the upstream ISEcp1 and its associated blaCTX-M gene but including different ends (Fig.IS1380.3 A and C) but these appear to be true transposition events since they generated 5 bp direct target repeats[16] (Fig.IS1380.3 B). This unexpected result suggests that end recognition (at least at the IRR end) is somewhat relaxed because, since the IR sequences show significant variation. 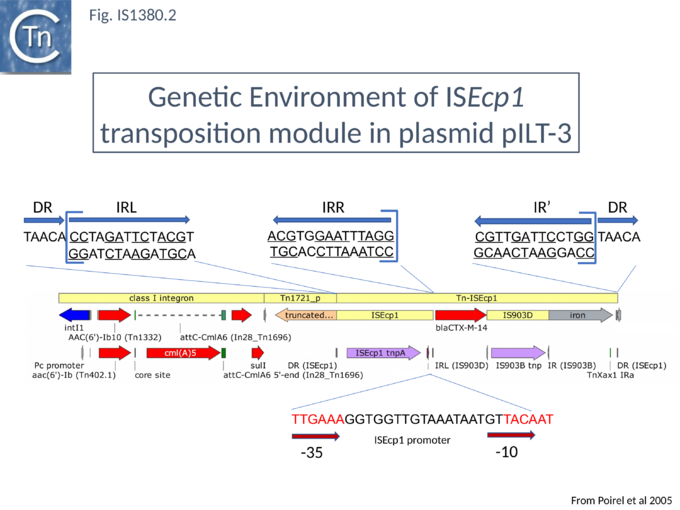 Fig. IS1380.2. Genetic Environment of ISEcp1 transposition module in plasmid pILT-3. The different component mobile genetic elements (a class1 integron, a partial copy of Tn1721 and the ISEcp1 based transposable element) are shown in the yellow bar. The associated genes and additional inserted IS are shown below (blue, the integron integrase; red, antibiotic resistance genes lilac, transposases). Above are the left (IRL) and right (IRR) terminal inverted repeats of ISEcp1 together with the surrogate IRR'. The flanking 5bp direct target repeats are also indicated. The outwardly facing ISEcp1 promoter which drives blaCTX expression is included at the bottom of the figure. 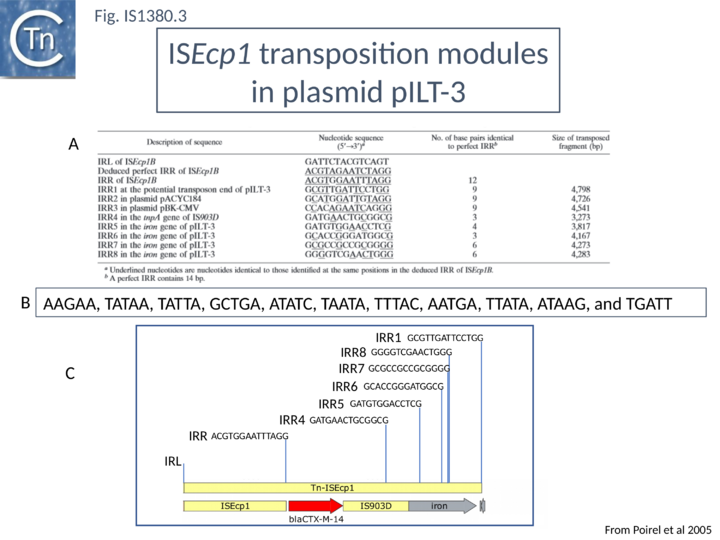 Fig. IS1380.3. ISEcp1 transposition modules in plasmid pILT-3. A) The relative use of a number of different neighboring surrogate IRR sequences in ISEcp1-driven transposition of blaCTX is shown together with their DNA sequences, the number of times each was observed and the length of the transposed DNA segments. B) different target repeat sequences generated by insertion. C) a diagram of the position of the surrogate IRs downstream of blaCTX.

In an additional set of experiments, it was subsequently shown that ISEcp1B can mobilize a beta-lactamase gene from the chromosome of Klebsiella ascorbata to a plasmid in E.coli [19]. The study involved a number of steps. A plasmid carrying an ISEcp1 copy was first transformed into a K. ascorbata strain which carries a chromosomal blaCTX-M gene specifying low level resistance to the cephalosporin cefotaxime (MIC 0.06 micrograms/ml). High level cefotaxime resistance colonies (0.5 or 2 microgram/ml) were scored after growth in liquid culture and occurred at 10-7 per viable cell. They were assumed to represent ISEcp1 insertions. Mobilization of blaCTX-M by ISEcp1 was then assessed by a direct mating out assay[17] from a Klebsiella ascorbata derivative to E.coli using the conjugative plasmid pOX38Gm[19].

More recently, to study the increasing number of the relatively high copy number ColE1-type plasmids which are now beginning to be identified having acquired antibiotic resistance genes, ISEcp1-mediated transposition has been monitored from the chromosome of clinical E. coli isolates[20]. A number of these were observed to carry a collection of plasmids including ColE1 derivatives. None of the strains were able to transfer the resistances by conjugation, but three could transfer cefoxitin resistance and the blaCMY-2 gene to a suitable E. coli recipient at very low frequencies (10-8 –10-9) when plasmid DNA was introduced into a suitable recipient by electroporation.

Although little is known about most other IS1380 family members, the ability to enhance expression of downstream genes may be a general characteristic. It was previously shown that IS1247 can activate gene expression and appears to participate in a similar type of transposition as ISEcp1[22]. In Xanthobacter autotrophicus GJ10 it can increase resistance to bromoacetate by insertion upstream and activation of the haloacetate dehalogenase gene and mobilizes the gene by transposition using a surrogate sequence resembling an IR downstream. More recently, another IS1380 family member, ISPme1 from Paracoccus methylutens[23], which also uses a surrogate downstream IR-like sequence, has been identified. Examples are shown in (Fig.IS1380.4 A and B). These elements have been named TMO (ISX) for Transposition Modules where ISX is the name of the IS involved. Like ISEcp1, there is an internal promoter downstream of the transposase gene which is oriented downstream[23]. In addition, another Paracoccus IS1380 family member, an IS1247 derivative from Paracoccus marcusii was identified as part of a mosaic transposable element. It appears that a TMO(IS1247a) (Fig.IS1380.4 C) had inserted into a member of the ISAs1 IS family, ISPmar4[24]. TMO(IS1247a) has flanking 5 bp DR in this transposition unit. It was suggested that the internal outwardly facing IS1247 promoter could activate the downstream putative alpha/beta hydrolase gene[24]. 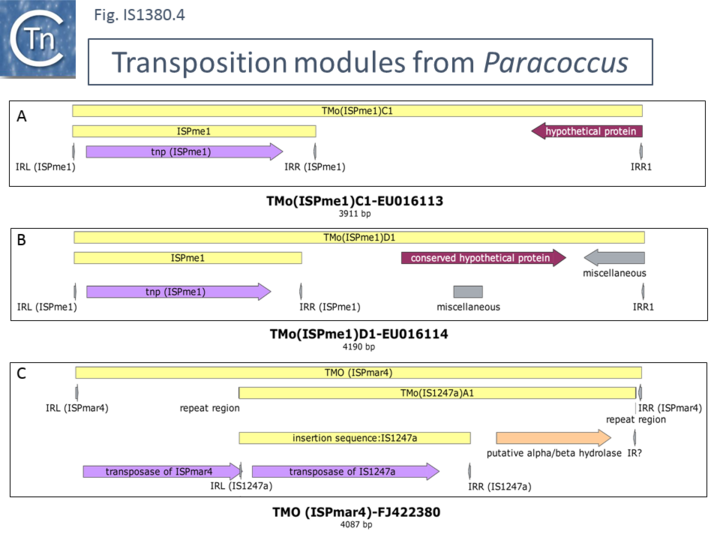 Fig. IS1380.4. Transposition modules from Paracoccus. Three examples of so-called “transposition-modules” from Paracoccus marcusii (Bartosik et al., 2008). There is an internal promoter downstream of the transposase. These elements may use surrogate ends.

Although no details of the IS1380 transposition mechanism are known, these observations suggest that, like other, IS such as IS91 (and potentially the ISCR, although no formal proof has yet been presented) are capable of “capturing” and driving transposition of neighboring, downstream genes.