General Information/What is an IS?

The original definition of an IS (Fig.1.3.1) was: a short, generally phenotypically cryptic, DNA segment encoding only the enzymes necessary for its transposition and capable of repeated insertion into many different sites within a genome using mechanisms independent of large regions of DNA homology between the IS and target [1]. Classical IS are between 0.7 and 2.5 kb in length, genetically compact with one or two open reading frames (orfs) which occupy the entire length of the IS and terminate in flanking imperfect terminal repeat sequences (IR) (Table 1). The orfs include the Tpase that catalyzes the DNA cleavages and strand transfers leading to IS movement and, in some cases, regulatory proteins. Their highly compact nature is illustrated by the fact that some IS have developed “recoding” strategies such as Programmed Ribosomal Frameshifting (involving ribosome slippage) and Programmed Transcriptional Realignment (involving RNA polymerase slippage) [2][3][4][5][6][7][8]. These permit assembly of different functional protein domains effectively encoding two proteins of different functions in one DNA segment. IS also often generates a short flanking directly repeated duplication (DR) of the target DNA on insertion. These characteristics are not limited to prokaryotic IS but are also shared with most eukaryotic DNA transposons. Classical IS generally transpose using a double-strand DNA intermediate. However, for prokaryotic IS, this strict definition has been broadened over the years with the discovery of an increasing number of non-canonical derivatives and variants, some of which are described in the following sections. Moreover, as we learn more about diversity from sequenced genomes, classification is becoming more problematic because the large degree of MGE diversity is obscuring the borders between certain types of TE (Fuzzy Borders) [9]. Despite their abundance and diversity, the number of different chemical mechanisms used in TE movement is surprisingly limited and many quite divergent TE share a similar mechanism. 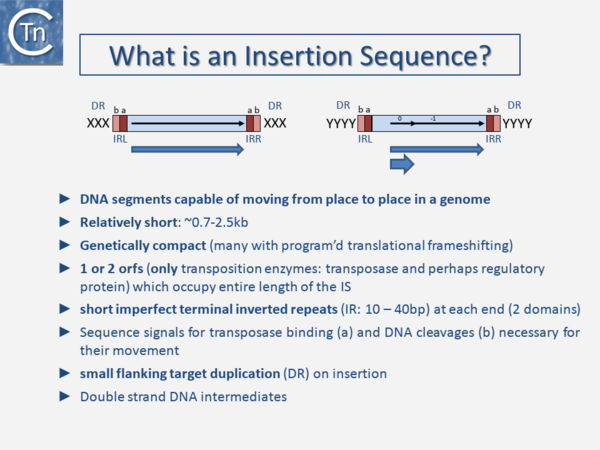 Fig1.3.1 What is an Insertion Sequence?

New types of IS

One example of this expanding diversity is the identification of another entire class of IS [10][11][12][13]. Members of this class use an entirely different mechanism of transposition involving single-strand circular DNA intermediates which appear to target stalled replication forks [14] (Fig.1.3.2). They possess small transposases (~150 aa) which are completely different to the classical IS in the type of chemistry they catalyze (1.10 Groups with HUH Enzymes). Another example are the casposons which are related to CRISPRs but whose transposition has yet to be fully characterized [15][16][17][18]. 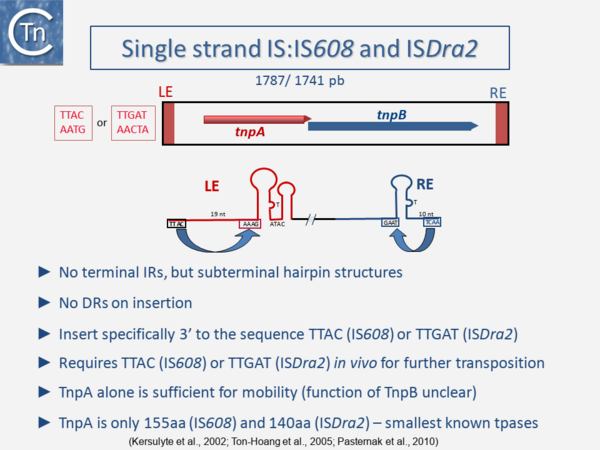