More recently, TE related to CRISPRs, Casposons have been identified[1] and a reassement of their ends has led to the identification of an 14-15 bp target duplication. Moreover, the purified Cas1 enzyme encoded by these ancestral transposons has been demonstrated to catalyse strand transfer of a pre-cleaved transposon in vitro but does not appear to promote transposon strand cleavage in this assay[2]. Cas1 "casposases" use similar chemistry to that used by the CRISPR Cas1-Cas2 complex but with opposite substrate specificities since CRISPR Cas1-Cas2 integrates "random" sequences into a specific site in the CRISPR locus whereas casposases integrate specific site (the casposon ends) into random target sequences (Fig.1.44). 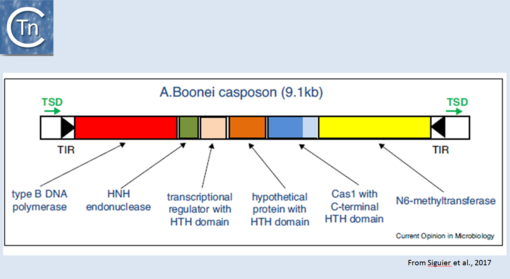