Recently, a study of ICE elements identified examples from type B Streptococcus [TnGBS[12]] and Mycoplasma[13] which include a DDE type Tpase rather than the more common phage integrase-like gene. Using a cascade PSI-Blast approach not only revealed two new IS families (ISLre2 and ISKra4) but established a distant relationship with the IS256 and ISH6 families[14] (Fig. IS256.1 and Fig. IS256.2). 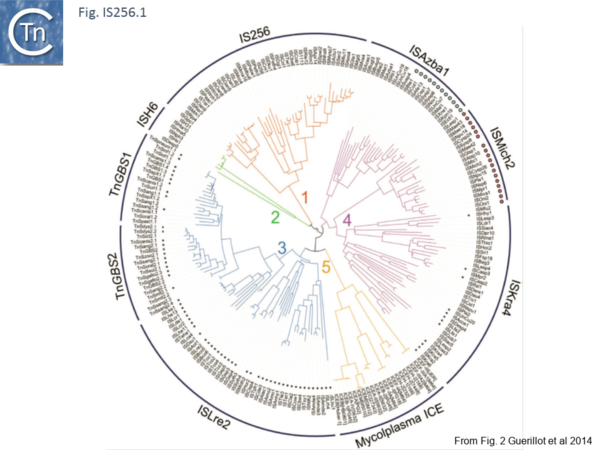 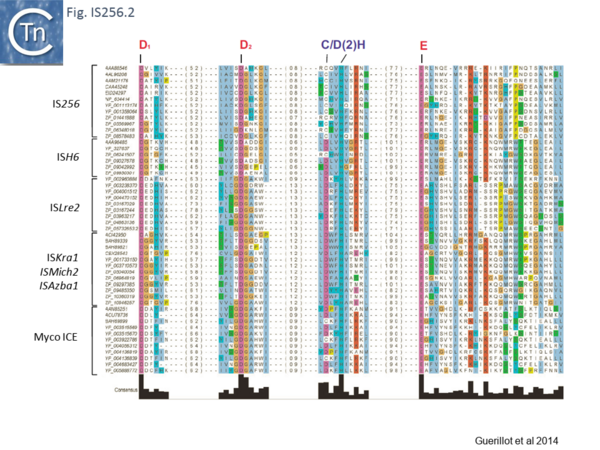 Analysis of the N-terminal Tpase region[15] also identified two shared domains (N1 and N2). N2 corresponds to a potential HTH domain in the region of the IS256 Tpase which recognizes the terminal IRs[16] (Fig. IS256.3). 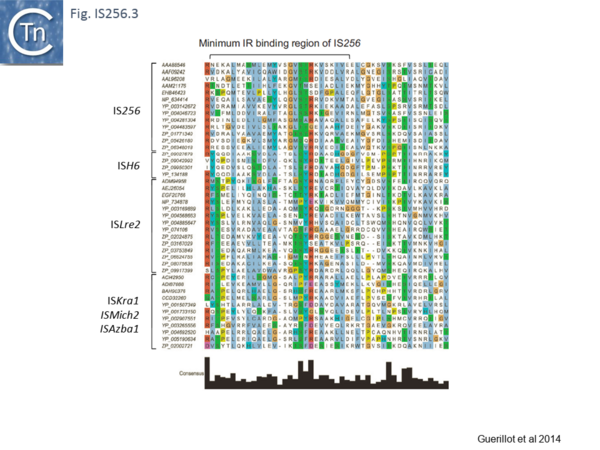 There is a distant relationship with the Tpase of the eukaryotic Mutator TE and, like MuDR from Zea mays, many generate 8-9-bp target repeat on insertion. They have therefore been called MULE (for Mutator-Like Elements). Like MuDr/Foldback, members of these groups carry a largely α-helical insertion domain between the second D and E catalytic residues. This includes a conserved C/D(2)H signature present in the eukaryotic and prokaryotic IS[18][19].

The classical IS256 group has large number of members in both bacteria and archaea. They are between 1200 and 1500 bp long with IR of 20-30 bp (Fig. IS256.4) and generate DR of between 8 and 9 bp. A single long orf carrying a potential DDE motif with a spacing of 112 residues between the second D and E residues (Fig. IS256.2), together with a correctly placed K/R residue. This spacing is due to an insertion domain[20][21]. The catalytic residues have been validated by mutagenesis[22]. It was shown several years ago that the Tpase of IS256 family elements share some similarities with the eukaryotic Mutator element[23], a relationship which has been explored recently in more detail[24].

There are more than 30 members confined at present to the Actinobacteria and the firmicutes. They are about 1300 pb in length with IR of about 26bp (Fig. IS256.4) and generally generate DR of 8bp (with variations of between 0 and 10). 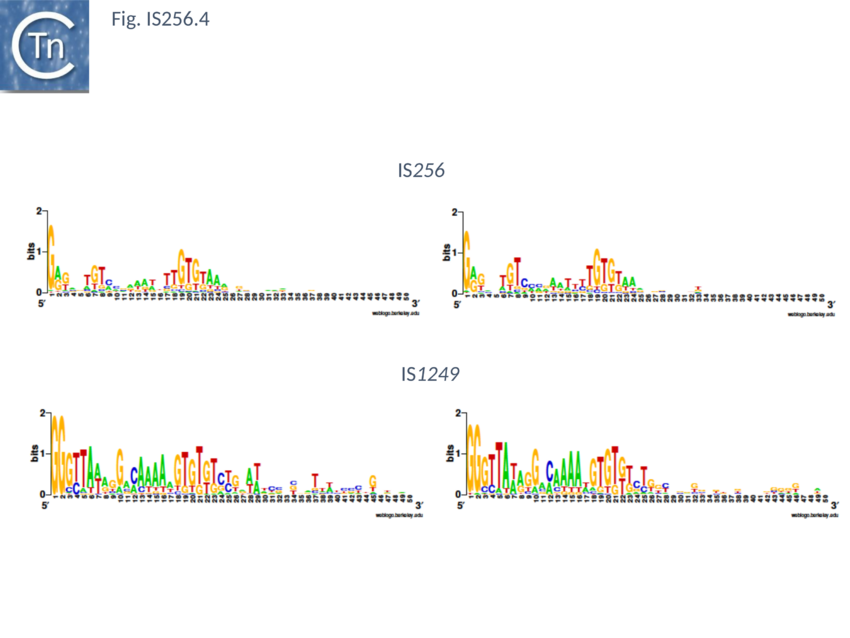 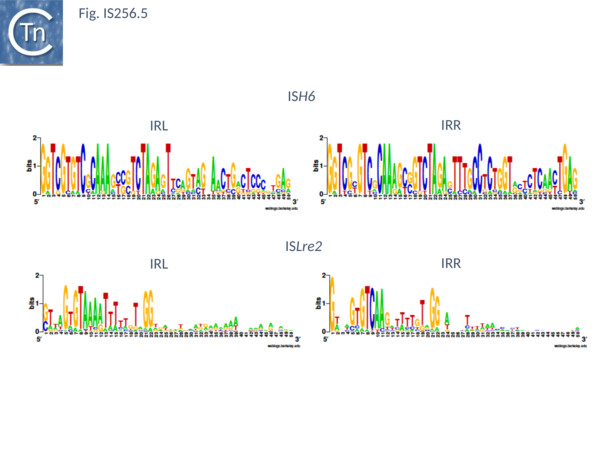 There are 48 entries for ISLre2 family members in ISfinder. They are restricted at present to the bacteria. They are between 1500 and 2000 bp long, with IR from 15 to 29 bp (Fig. IS256.5) and generate 9 bp DR. Together with the related TnGBS ICE, show strong target specificity and insert 13-17 bp upstream of A promoters[34][35] in oriented fashion with RE proximal. PCR analysis has detected a transposon circle junction, as with the related ICE, suggesting that transposition may occur via a Donor Primed Transposon Replication process.

This includes 24 members which are presently limited to the cyanobacteria. Twenty two have a Tpase orf distributed between two reading phases while in the remaining 2 the Tpase forms a unique continuous orf. However all show a potential but atypical frameshift motif, TTTTTT which could be involved in either PRF or PTR recoding. Further experimental analysis would be necessary to confirm or refute this. Members are between 1250 and 1400 bp long with a Tpase of 360aa, IR of between 18 and 39 bp (Fig. IS256.6) with 8 bp DR. Three members (ISCysp26; ISMic1; ISMich2) carry a passenger gene annotated as hypothetical protein.