Difference between revisions of "Glossary"

Following Roberts et al [4] classification system, the ISfinder team (Mick Chandler and Patricia Siguier) and Jacques Mahillon proposed a enhancement for this classification system, now including terms and definitions for MICs (Mobile Insertion Cassette), composed of passenger genes but no transposase, and MITES (Miniature Inverted repeat Transposable Element), which are short IS-related elements with no internal open reading frame but which, like most ISs, transposons and MICs, include IS-like extremities. It is important to note that a single IS might in principle be represented in all four forms (Table 3 and Fig1). 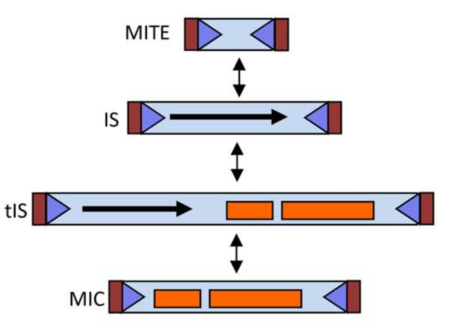 Since TEs have been found in virtually all eukaryotic species investigated so far, displaying an extreme diversity, revealed by thousands or even tens of thousands of different TE families[8], Finnegan and colleagues in 1989, proposed the first TE classification system, which distinguished two classes by their transposition intermediate: RNA (Class I or retrotransposons) or DNA (Class II or DNA transposons)[8][9]. The transposition mechanism of Class I is commonly called ‘copy-and-paste’, and that of Class II, ‘cut-and-paste’ [9]. Later, in 2007, Wicker and colleagues proposed a common TE classification system that can be easily handled by non-specialists during genome and TEs annotation procedures [8]. This system provided a consensus between the various conflicting classification and naming systems that are currently in use[8]. A key component of this system is a naming convention: a three-letter code with each letter respectively denoting class, order and superfamily; the family (or subfamily) name; the sequence (database accession number) on which the element was found; and the ‘running number’, which defines the individual insertion in the accession. The unified system is also intended to facilitate comparative and evolutionary studies on TEs from different species. (see figure below)[8] . 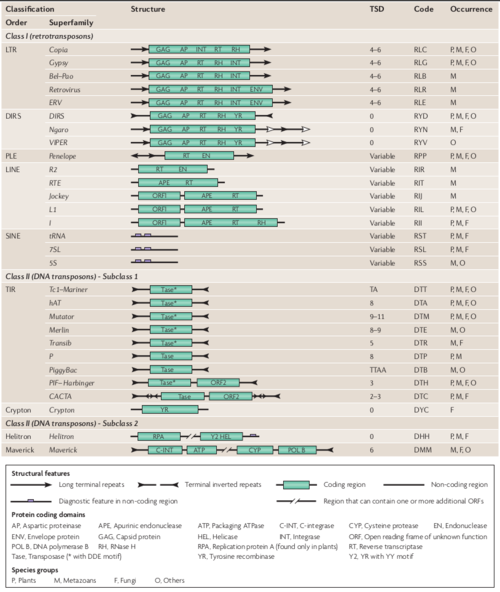 The proposed classification system for eukaryotic Transposable Elements (TEs). The classification is hierarchical and divides TEs into two main classes on the basis of the presence or absence of RNA as a transposition intermediate. They are further subdivided into subclasses, orders, and superfamilies. The size of the Target Site Duplication (TSD), which is characteristic for most superfamilies, can be used as a diagnostic feature. To facilitate identification, we propose a three-letter code that describes all major groups and that is added to the family name of each TE. DIRS, Dictyostelium intermediate repeat sequence; LINE, long interspersed nuclear element; LTr, long terminal repeat; PLE, Penelope-like elements; SINE, short interspersed nuclear element; TIR, Terminal Inverted Repeat. This figure was extracted from Wicker et al., 2007). For more details please see [8].