The principal factor in IS classification is the similarity, at the primary sequence level, of the enzymes which catalyze their movement, their transposases (Tpases). In addition, a variety of characteristics are also taken into account. These include: the length and sequence of the short imperfect terminal inverted repeat sequences (IRs) carried by many ISs at their ends (TIRs or ITRs in eukaryotes); the length and sequence of the short flanking direct target DNA repeats (DRs) (TSD, Target Site Duplication, in eukaryotes) often generated on insertion; the organization of their open reading frames or the target sequences into which they insert[1][2][3][4]. IS and some transposons can also be divided into two major types based on the chemistry used in breaking and rejoining DNA during TE displacement: the DDE (and DEDD) and HUH enzymes. Additional types of transposase enzymes have been identified (Fig.7.1) but are generally associated with other types of transposon rather than IS. 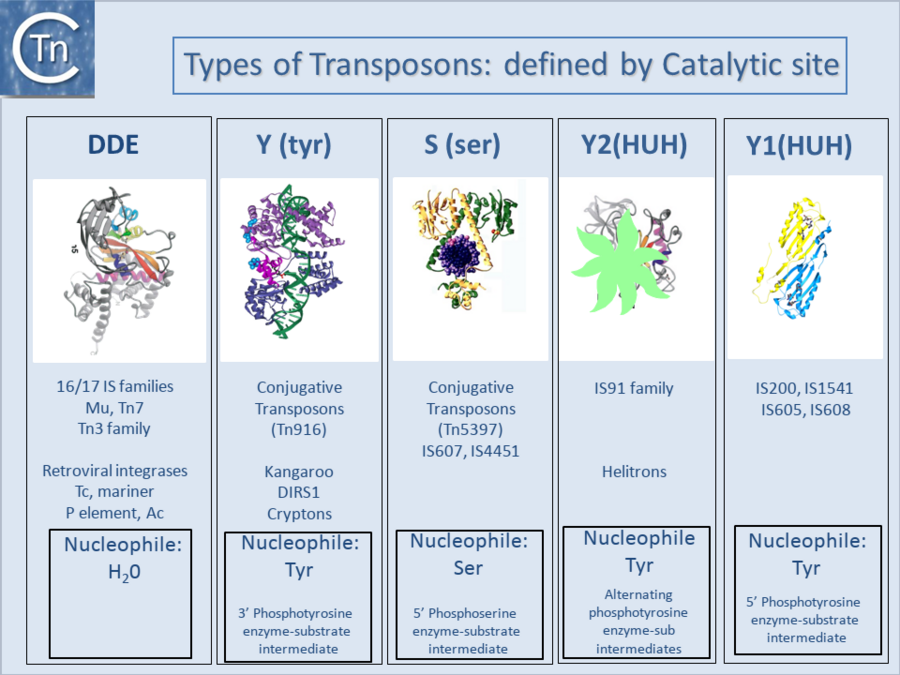 Fig.7.1. Types of Transposon and catalytic sites. Each column shows a different type of transposase with the principal amino acids defining their catalytic sites shown at the top. Underneath are shown examples in which the atomic structures have been determined (May 2020) there is no overall structure of a bacterial Y2 enzyme from the IS91 family. Below the cartoons, the figure indicates some of the bacterial TE and, below, the eukaryotic TE which encode transposases with each of the catalytic centers. In boxes at the bottom are shown the nucleophiles used in each case to break the phosphodiester DNA bond.

DDE enzymes, so-called because of a conserved Asp, Asp, Glu triad of amino acids which coordinate essential metal ions, use OH (e.g. H20) as a nucleophile in a transesterification reaction[5] (Fig.7.1) and (Fig.7.2). IS with DDE enzymes are the most abundant type in the public databases (Fig.4.2). This is partly due to the fact that the definition of an IS became implicitly coupled to the presence of a DDE Tpase, an idea probably reinforced by the similarity between Tpases of IS (and other TE) and the retroviral integrases (Fig.7.2)[6][7][8] particularly in the region including the catalytic site. More precisely, for these TE, the triad is DD(35)E in which the second D and E are separated by 35 residues. As more DDE transposases were identified, the distance separating the D and E residues was found to vary slightly (TABLE MGE transposases examined using secondary structure prediction programmes)[9]. However, for certain IS, this distance was significantly larger. In these cases, the Tpases include an “insertion domain” between the second D and E residues [9] with either α-helical or β-strand configurations (Fig.1.8.2). Although in most cases this is a prediction, it has been confirmed by crystallographic studies for the IS50 [β-strand[10] and Hermes [α-helical;[11] Tpases. The function of these “insertion domains” is not entirely clear[9].

Although DDE-type transposons share basic transposition chemistry, different TE vary in the steps leading to the formation of a unique insertion intermediate (Fig.7.4)[5][9]. They catalyze the cleavage of a single DNA strand to generate a 3’OH at the TE ends which is subsequently used as a nucleophile to attack the DNA target phosphate backbone. This is known as the transferred strand. The variations are due to the way in which the second (non-transferred) strand is processed[5][12][13].

There are several ways in which second-strand processing can occur (Fig.7.4): for certain IS, the second strand is not cleaved but replication following the transfer of the first strand fuses donor and target molecules to generate cointegrates with a directly repeated copy at each donor/target junction. This is known as replicative transposition (e.g. IS6 and Tn3 families) or, more precisely, Target Primed Replicative Transposition (TPRT) (Fig.7.4 pathway a).

In the other pathways, the flanking donor DNA can be shed in several different ways: the non-transferred strand may be cleaved initially several bases within the IS prior to cleavage of the transferred strand [e.g. IS630 and Tc1[14][15][16] (Fig.7.4 pathway d); the 3’OH generated by the first-strand cleavage may be used to attack the second strand to form a hairpin structure at the IS ends liberating the IS from flanking DNA and subsequently hydrolyzed to regenerate the 3’OH known as conservative or cut-and-paste transposition (e.g. IS4 family;[17] (Fig.7.4 pathway f) and (Tn10 movie - see below) (Figs. IS4.5; IS4.6; IS4.7); the 3’OH of the transferred strand from one IS end may attack the other to generate a donor molecule with a single strand bridge which is then replicated to produce a double-strand transposon circle intermediate and regenerating the original donor molecule known as copy-out-paste-in or more precisely Donor Primed Replicative Transposition (DPRT) (e.g. IS3 family) [18] (Fig.7.3 pathway e) and (IS911 movie - see below); or the 3’OH at the flank of the non-transferred strand may attack the second strand to form a hairpin on the flanking DNA and a 3’OH on the transferred strand (at present this has only been demonstrated for eukaryotic TE of the hAT family and in V(D)J recombination [19]) (Fig.7.4 pathway g).

Clearly, many families produce double-strand circular intermediates, but this does not necessarily mean that they all use the copy-paste DPRT mechanism, since a circle could formally be generated by excision involving recombination of both strands[5]. These differences are reflected in the different IS families. 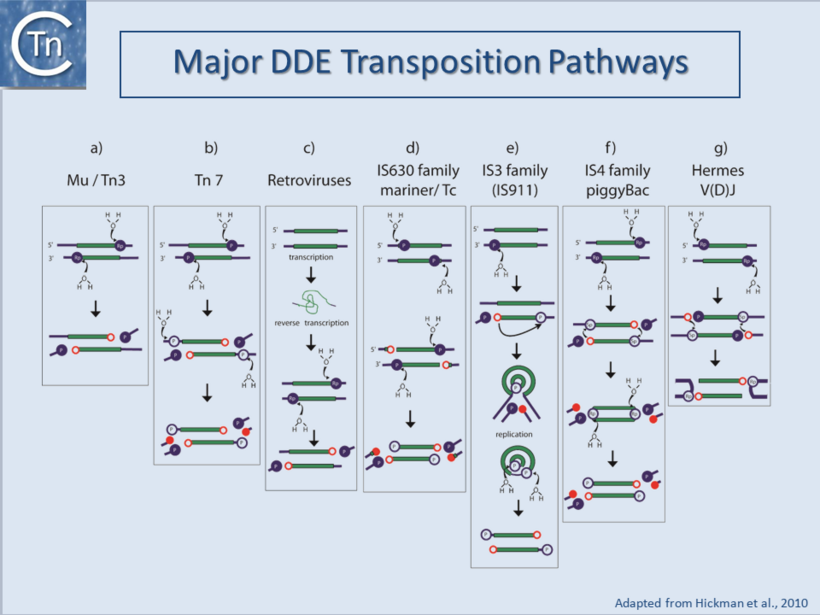 Fig.7.4. Major DDE transposition pathways: Dealing with the second strand. The color code is as follows: transposon DNA (green); flanking donor DNA (blue); target phosphates destined to be removed from the final liberated transposon (filled blue circles with a white “P”); phosphates destined to remain as 5′ transposon ends (open blue circles); the preferred stereoisomer, Sp or Rp, where known, is indicated within the circles; liberated 3′OH groups involved in strand joining reactions (open red circles); 3′OH destined to be removed from the liberated transposon (filled red circles); H2O is the attacking nucleophile in the hydrolysis reactions. (a) The Mu and Tn3 cleavage reactions. Note that the preferred stereo isomer has been demonstrated only for Mu and not for Tn3. (b) Tn7 cleavage reactions. Cleavage of the transferred strand (top of panel) is shown occurring prior to cleavage of the non-transferred strand (middle) leading to the liberation of the transposon from flanking donor DNA (bottom of panel), although this order of cleavage reactions has not been demonstrated experimentally. The two types of cleavage are catalyzed by different enzymes. (c) Retroviral “processing” reaction, equivalent to cleavage of the transferred strand. An initial transcription step from the integrated provirus is indicated. The RNA genome is then encapsidated with a second copy and undergoes reverse transcription following infection to generate the double-strand DNA integration intermediate. The intermediate is flanked by only short fragments of donor material and does not require second-strand processing for insertion. (d) Transposition by the members of the IS630 family and the Tc1/Mariner superfamily is initiated by cleavage of the non-transferred strand (top of panel) at several bases within the transposon end (middle) leaving these bases attached to the liberated flanks following cleavage of the transferred strand (bottom). (e) For IS911, IS2, IS3, and other members of the IS3 family, single-end hydrolysis occurs (top). The liberated 3′OH then directs a strand transfer reaction to the same strand, several bases 5′ to the other end of the element. This results in the formation of a single-strand circle, which is then resolved into a transposon circle by replication from the free 3′OH (filled red circle). Single-strand hydrolysis at each 3′ end within the circle generates a linear transposon which can then undergo integration. (f) The IS4 family and piggyBac have similar mechanisms. Following the initial nucleophilic attack on the Rp target phosphate, the liberated 3′OH attacks a Sp phosphate in a trans-strand transfer reaction to generate a hairpin intermediate, liberating the transposon from its flanking donor DNA and inverting the target phosphate to its Rp configuration. These then become the substrates for second hydrolysis. Note that the stereochemistry has been analyzed only in the case of Tn10. (g) Hermes and V(D)J transposition occurs by initial cleavage of the non-transferred strand (top). The liberated 3′OH on the donor flank then attacks the opposite strand (middle) to generate a hairpin structure on the donor flank (bottom). The stereochemistry has been analyzed for V(D)J only. Modified and reprinted from Turlan and Chandler (2000),

A similar type of Tpase, known as a DEDD Tpase, is related to the Holiday junction resolvase, RuvC [20][21][22] but is at present limited to only a single known IS family (IS110). The organization of family members is quite different from that of the DDE ISs: they do not contain the typical terminal IRs of the DDE IS (although one subgroup, IS1111, carry sub-terminal IR) and do not generate flanking target DRs on insertion. This implies that their transposition occurs using a different mechanism as the DDE IS. It seems probable that an intermediate resembling a four-way Holliday junction is involved. Moreover, in contrast to the DDE transposases in which a DNA binding domain invariably precedes the catalytic domain, DEDD transposases appear to include a DNA binding domain downstream from the catalytic domain.

The third transposase family is represented by IS607 which carries a Tpase closely related to serine recombinases such as the resolvases of Tn3 family elements. Little is known about their transposition mechanism. However, it appears likely, in view of the known activities of resolvases, that IS607 transposition may involve a double-strand DNA intermediate (Grindley cited as pers. comm. in [40]) see also [41] (Fig.7.1).

Finally, tyrosine site-specific recombinases of the bacteriophage integrase (Int) type are often associated with conjugative transposons (Integrative Conjugative Elements or ICE)( IS related to ICE) and are considered to be Tpases. However, at present there are no known IS which use this type of enzyme (Fig.7.1).